Last week I purchased two spaghetti squash and finally cooked one up last night to the sheer delight of my husband;  the final product was vastly enjoyed. 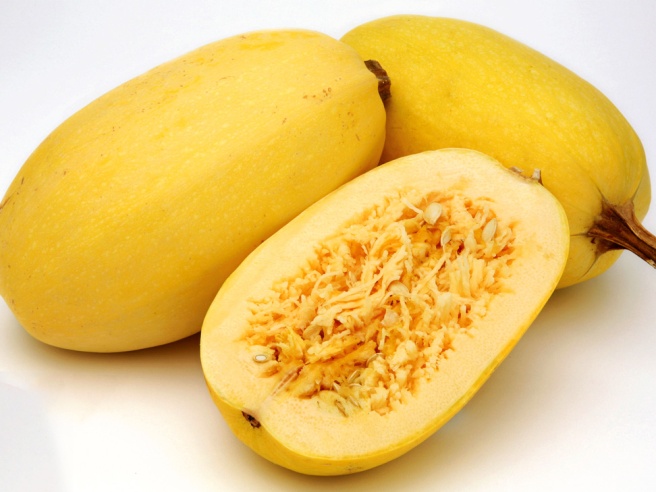 The origins of the spaghetti squash are very interesting.  Although one might assume that it was indigenous to North America, it was actually introduced to Japan in 1921 from a Chinese agricultural research facility.   In 1936 this squash was introduced to North America but it didn’t gain popularity until much later.  The name “spaghetti squash” pertains to the eerie similarity to spaghetti once the cooked strands are scraped from the shell.

The similarity ends there though.  The nutrients and caloric intake vastly differ between pasta and spaghetti squash.

Although pasta has a higher amount of protein due to the increased carbohydrates, protein can easily be found in other healthier sources.  The spaghetti squash is a great alternative for anyone on a low carbohydrate, paleo or diabetic diet.

There are a variety ways that the spaghetti squash can be prepared.

-roasted whole in the oven with skewer holes
-microwaved, cut in half-microwaved whole
-baked in water (for moisture)

I have tried both the microwave and the roasting option.  For the recipe I will be posting, I opted to cut the squash in half and roast it as I have found it an easier way to determine whether it is done cooking.

Choose whatever method is best suited for you.  I have found personally that roasting in the oven does bring out the best taste of the squash.   You will find your squash is cooked through when the fork can easily pierce through the flesh and when the shell dents when some pressure is placed on it.

You made it this  far!  Now on to the recipe.

A Healthy Alternative with Great Taste 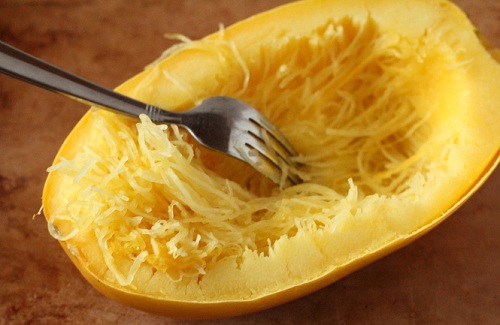